Fridays are filled with all sorts of requests, so I decided today to start a Feature Friday where I share per week, ongoings during the month. This Friday’s three share are: Digital Detox, a get away to escape your digital gadgets, Dent the Future, a conference that brings together people from all over the world who care to make an impact on the future of our universe (talk about huge impacts), and the many hackathons around the bay area.

March Madness is totally upon us.  Earlier this week, I shared that it was Pi Day and then about the current Google Reader Kill.

My first share comes via my FB friend, Levi Felix, founder of Digital Detox, who creates retreats, workshops, and vacations for people to unplug from all their tech devices and plug in with themselves and others in beautiful settings. The retreats since their inception last year, occur almost every month, which different locations for those wishing to take part.  This month’s retreat is set up at the Shambhala Ranch in Ukiah, California.

For all those who are working hard and only taking breaks this summer, maybe you want to get “grounded” this summer in the summer camp for adults.  Camp Grounded is Levi and his teams’ awesome version of the summer camp many of us loved as kids.  The “camp” takes place in beautiful Antelope Valley, and is a currently at an early bird special of 245USD.

Digital Detox’s summer camp is pretty serious, and the site has a sign that has a disclaimer for all those who might have not been sure that this wasn’t a conference:

This ain’t no conference, get ready to be in summer camp mode!

The digital detox option might be just the sort of retreat that some of us crave after March Madness, and if you’re willing to cough up some more dough, maybe you want to totally escape.  Digital Detox this April will be held on an amazing remote island off the coast of Cambodia.  The island has only 7 residents!  Talk about getting away.

I learned about this via Robert Scoble, as he is currently giving away a ticket to get to go to this conference with him (for free), oh there’s one catch, you have to have the most compelling story of how you are “denting the future” and changing the world with technology… no biggie!

Dent the Future is a conference being held  March 24-27 at Sun Valley Resort, Idaho.  The conference brings together those who will impact what happens in the future for science, technology and humanity.  Although you might not be able to attend, it is great to see the line-up, and visit their blog to learn about the Five Minds of the Future that Dr. Howard Gardner speaks about in his new book with the same title.

Why tell you about a conference you can’t attend?  People need to have questions thrown at them, such as what it would be needed to make your dent in the universe, and also to give them an urgency to start “hacking” on their ideas.  Based on what I learned from reading the blog post on Dr. Gardner, I can say, there are enough creative and synthetic minds in the valley for us to really make an innovative dent. 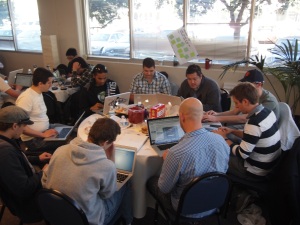 Get your Hack on! (SWSanJose that I helped organize)

Well, now you want to build!  Hackathons are plenty this month, with a few highlighted at eventbrite.  Thus far, I have signed up to a couple next week.  Here you can put your mockups, your tech skills, your design abilities and your ideas to the test over a weekend or even a day to hack an app or maybe even a BMW.

Here’s a link to all the hacks happening in March and April the bay area:

If you want to see some of my past writings on hackathons such as how to create one yourself, just ping me and I can send them your way.

TGIF everyone, and I hope this weekend you don’t just drink away your sorrows, but you cultivate some better ways to conquer some of your to-do list!

Images for Dentthefuture, and Digital Detox were added from their respective sites.

As usual, reach me @norabean